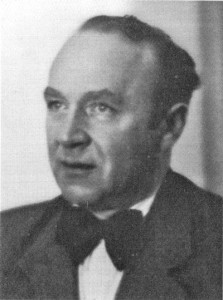 Dr. Karl Nowotny was born in Vienna in 1895 and studied medicine at the University of Vienna. When he completed his studies he joined the University Clinic for Psychiatry and Neurology and ran the psychiatric-neurological station.
One of his teachers was the Nobel Prize winner, Professor Wagner-Jauregg, from the school of Alfred Adler, the founder of Individual Psychology.
Dr. Nowotny became very well-known in the field of Individual Psychology. He was co-founder of the “International Association for Individual Psychology” and for years was on the Board of Governors of the “Austrian Society for Psychic Hygiene”.
After the end of World War II he took over the management of the Vienna City Mental Home, “Maria Theresia Schloessl” and ran it until he retired. Among his patients were many famous people from the world of art and politics.
He also lectured psychiatry and neurology at the Vienna University and over the years published a great many scientific papers, particularly on Individual Psychology.
In 1960 he was awarded the Golden Badge of Honour for outstanding services to the Austrian Republic.
In April 1965 Dr. Nowotny left the material world, but several months after his passing he made mediumistic contact with it once again.